In my 20 years in London, I doubt I had that many cups of tea.
(I bet some of my former Guardian colleagues can have that many a day!) 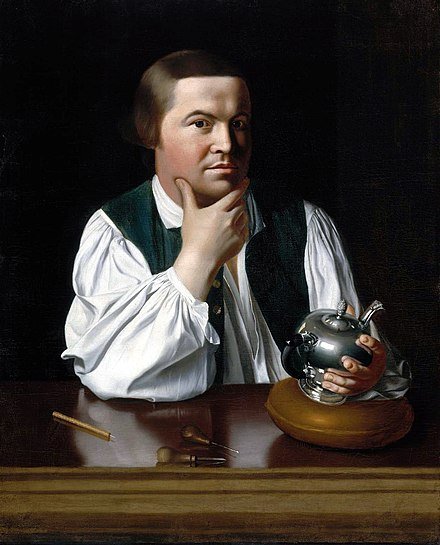 The site of the Boston Tea Party is now probably a parking lot, as that part of the harbor was turned into more space for a rapidly growing city. (As my dear readers know, the Back Bay was also filled in to produce prime real estate.)

To those of you who may be new to Jimproper.com, this blog celebrates the connection between the city of Boston and my immigrant family, who came to America to find a new life.

Paul Revere might seem an unlikely link with a bunch of Italians, but Boston’s history is more complicated than you might think.

And at the center of it all is Revere’s house along the Freedom Trail in the North End, which is now the Italian section of town.
But it wasn’t always that way.

In Paul Revere’s time, the North End was what Beacon Hill and the Back Bay are today: Home to Boston’s wealthiest citizens.
One must remember that Revere was a very successful silversmith and businessman, as well as the subject of Longfellow’s patriotic poem:

Listen, my children, and you shall hear
Of the midnight ride of Paul Revere,
On the eighteenth of April, in Seventy-Five:
Hardly a man is now alive
Who remembers that famous day and year.
He said to his friend, “If the British march
By land or sea from the town to-night,
Hang a lantern aloft in the belfry-arch
Of the North-Church-tower, as a signal-light,—
One if by land, and two if by sea.” 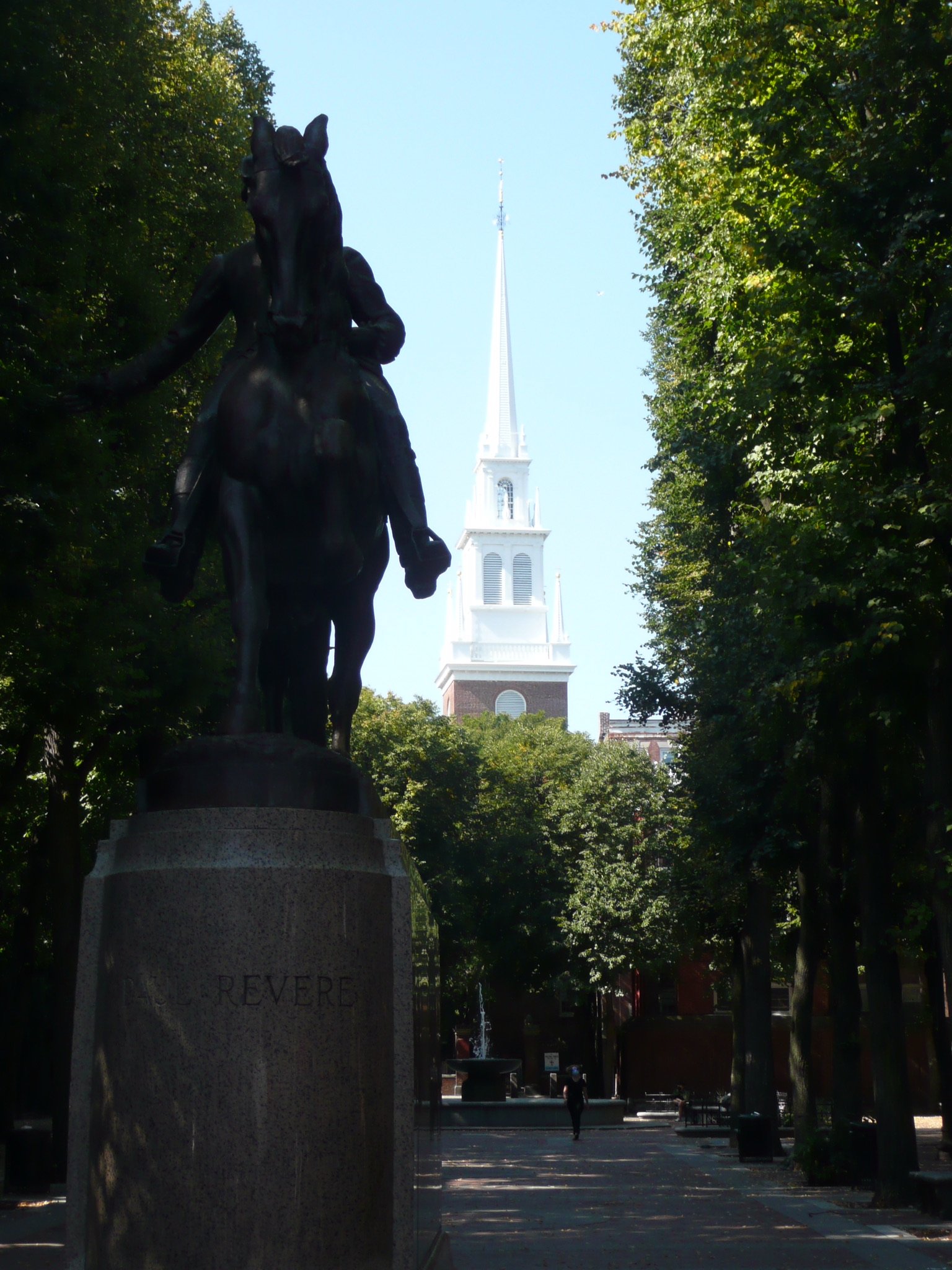 But by the middle of the next century, waves of immigrants began to come from Europe to Boston’s North End.

I’m sure people like Revere whined about immigrants then, just as the good people of Boston whine about them now. (Despite the fact that Bostonians, both Proper and Im-, are all children of immigrants. Unless they happen to have an ancestor named Little Running Bear).

First it was the Irish. And Jews from eastern Europe. Then the Italians.

By 1880, around a century after Revere’s ride, the North End was mainly Irish; there were fewer than 1,000 Italians, out of a population of around 23,000.
But by 1895, there were 7,700 Italians.
And by World War Two, the area was about 95% Italian.
(The figures are from the study Race Conflicts in the North End by William Foote Whyte, New England Quarterly, December 1939.)

As the North End filled up with Italians, the North Square section, where Revere’s house stands, became home for many immigrants from Avellino in the province of Campania.
My grandfather, Vincent Falzarano, was from Avellino. (Here he is serving in the US Marines during World War One.) 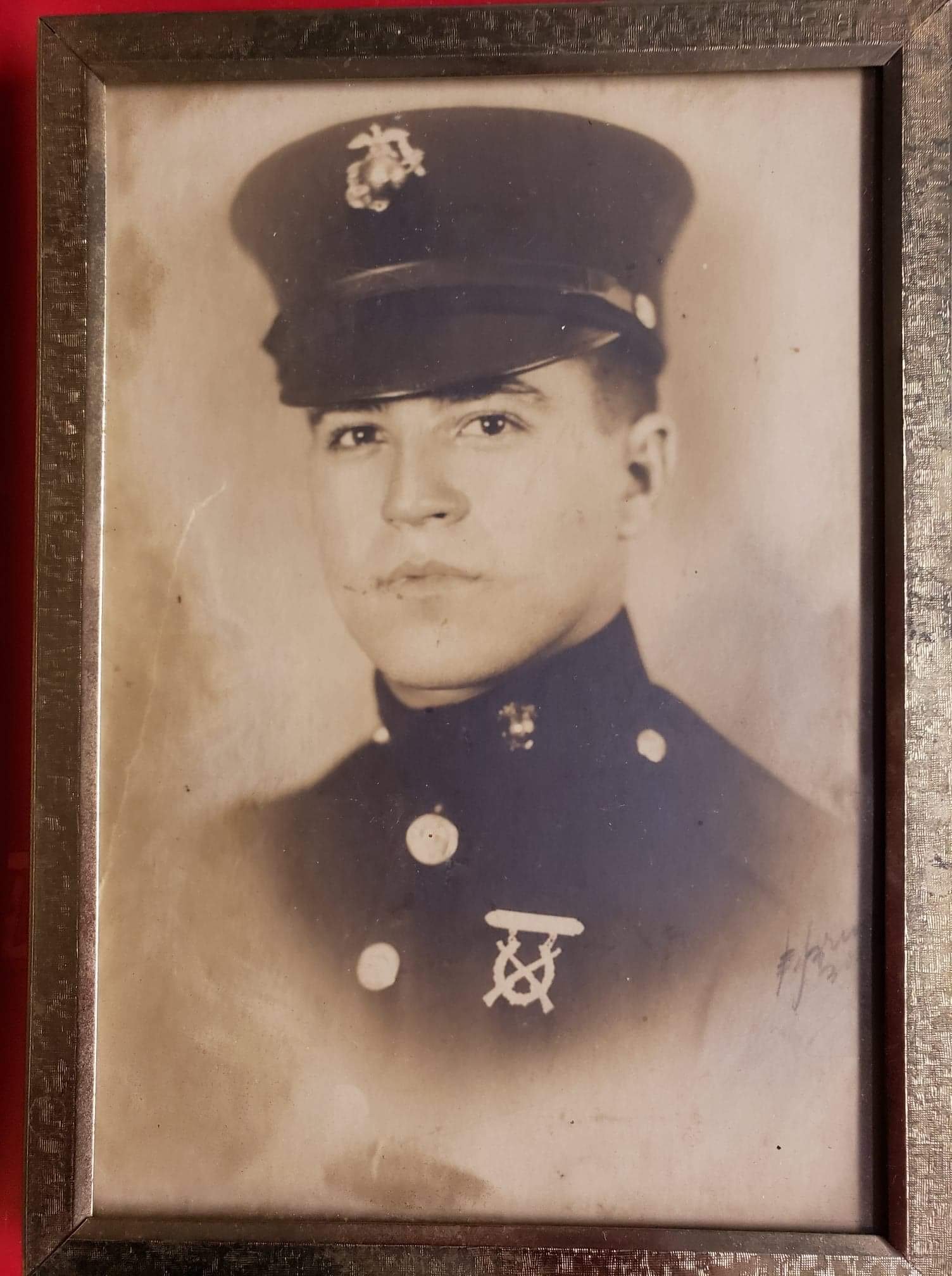 At the turn of the 19th century, the Paul Revere House became a tenement for many people from Avellino. Here is a photo from that time. 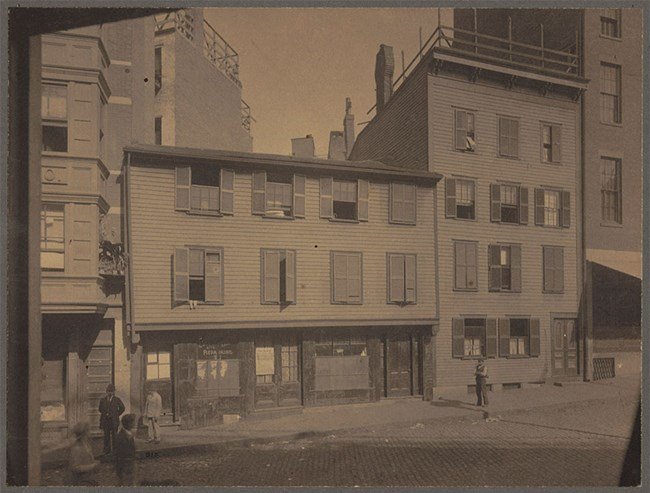 And here is the house about 10 years later, around the time my grandfather came to America. 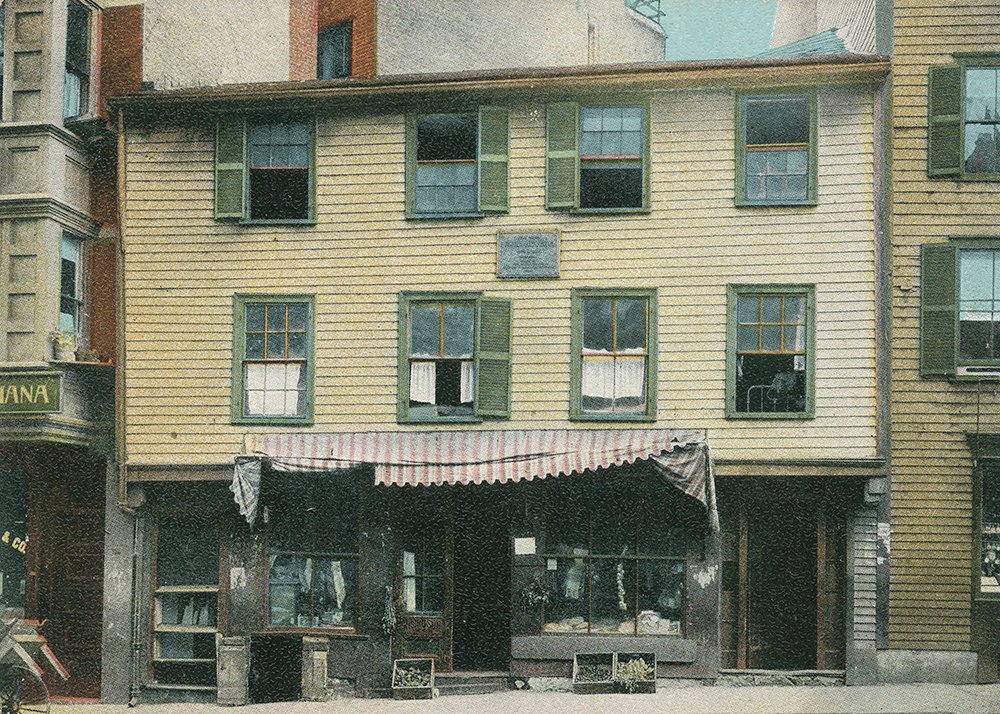 Vincent Falzarano settled in East Boston, across the harbor, and then in Malden, Massachusetts.
In later life he became a guide at the Paul Revere House. 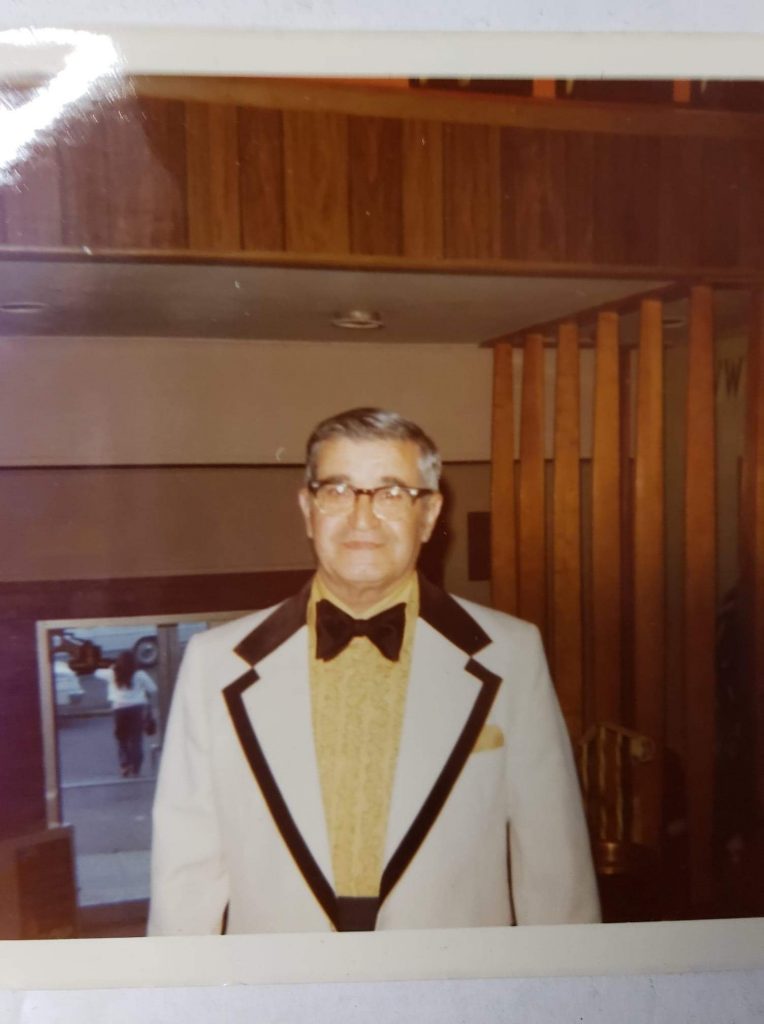 He was very proud to be able to share his knowledge of US history with other Americans, and with people from around the world.
From rural Italy to the heart of Boston: This is the story of my family.

When tourists come to the Paul Revere House today, they rightly focus on that fine patriot who sounded the call against the British invaders (who were kind enough to wear those lovely red coats!) 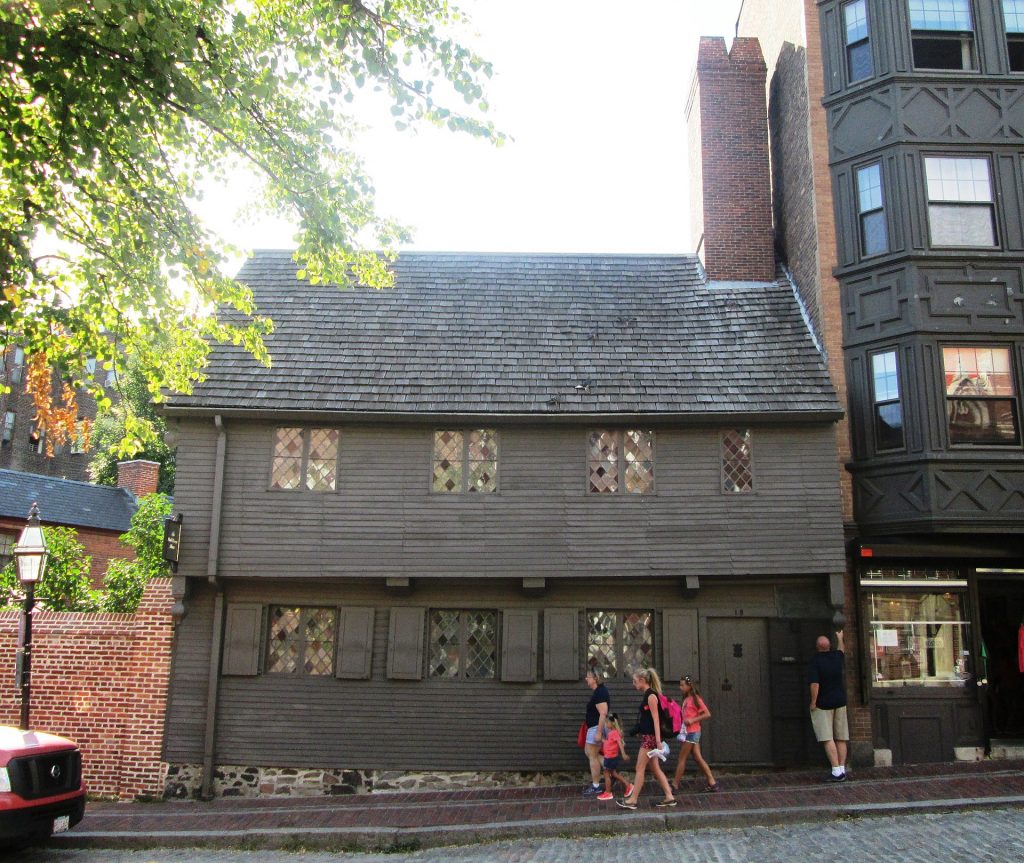 But let’s not forget all the Italian-Americans who played their part in the story of Paul Revere.